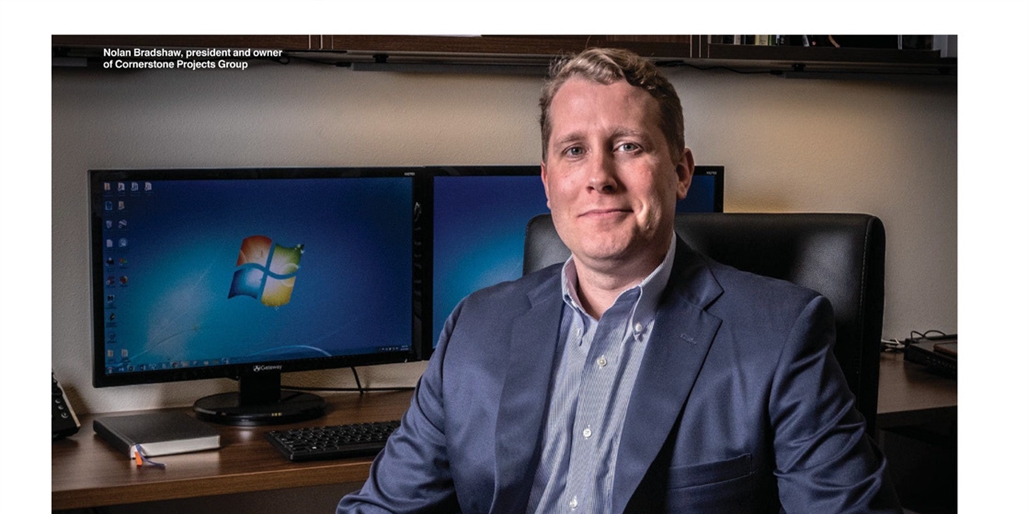 With the economy in recession and architecture and construction ground to a halt, entrepreneur Nolan Bradshaw decided to start his own firm from scratch.  His Cornerstone Projects Group, its latest project a collaboration in Fort Worth's South Main Village, bounds ahead.  Business Strategy - Run toward the roar.

Many entrepreneurs chose their path.  If you ask Nolan Bradshaw, he would tell you his path into entrepreneurship came with a gentle nudge in the back.

That perhaps made his run-toward-the-roar moment all the more a leap of faith.

The 2007 market crash was tough on a lot of industries, but architecture was one of the hardest hit.  Companies nationwide froze their hiring, construction projects all but ground to a halt, and about 30 percent of the industry was laid off in basically the blink of an eye.  In a cruel twist, that 30 percent never returned to the industry.

At the time, Bradshaw worked for a firm in Dallas and saw the ominous wind blowing.  He opted to launch his own consulting firm, run toward the roar, and start from scratch.  His company, the Cornerstone Projects Group, based in Fort Worth, is the fruit of a decade’s worth of work.

“It was very organic in a sense,” Bradshaw says.  “You start out in this industry environment, and then you kind of grow into something you see demand for.  It worked out.”

The demand Bradshaw saw in the Fort Worth area was far more than just architecture.  Bradshaw is a licensed architect, but Cornerstone, which opened in 2010, does a bit of everything.  They’re in construction, design-build, and architecture.  Cornerstone’s focus is on sustainability, which has come to the fore with the company’s redevelopment of a mixed-use property at 710 South Main St. in the South Main Village.  M2G Ventures – headed by Susan Gruppi and Jessica Workman – has teamed with Bradshaw on the project, a redevelopment of the All Needz plumbing building.  The first tenant, a cider house, plans to open in September.

Bradshaw’s Cornerstone is currently on a fast-growth path.  But it wouldn’t have gotten off the ground had he not taken that initial leap of faith toward the roar of entrepreneurship.

“I remember looking around the office when I was working in Dallas at some of those firms, and I was just not overly inspired by where I was going to be in 10 years,” Bradshaw says.  “I said, I really want to see what our clients are doing on the deal side, because I think that’s interesting too.  That was really the reason I didn’t just wait it out and find another job.  It was that curiosity that spurred me to get into the development business.”

Bradshaw can run off a laundry list of reasons why Cornerstone is one of the fastest growing developers in the Metroplex.  But the biggest, and the one he’s most proud of, is a respect for the end product.  Bradshaw freely admits Cornerstone isn’t the cheapest option, but the quality it delivers is above and beyond the norm, he says.  For instance, Cornerstone has certain requirements in working with new homebuilders: Homes must be closer to the street and mostly outfitted with large front porches.

Cornerstone cares about the community, always one of Bradshaw’s visions even in the incubatory stages.  Now that he’s run toward the roar, the sky is the limit for Cornerstone’s future growth.

“There is no degree in development,” Bradshaw says.  “I think the ones who are creative and the one’s that care about the communities they build in are the ones who do well and create more lasting change.”

Jason Forrest is CEO of Forrest Performance Group in Fort Worth.  With more than a decade of coaching and speaking experience, Jason is an expert at creating high-performance cultures through corporate training programs.  He writes this column for each issue of Fort Worth Inc.